The wait was worth it: SocietyIslands4XPlane is now available. So then let’s go: Welcome to Bora Bora and the Leeward Islands, the western part of the Society Islands in the South Pacific. Stunning atolls, sandy beaches and mountainous islands covered by tropical forests are waiting for you! Read more… 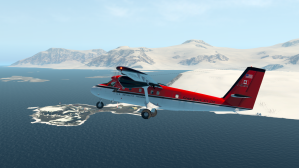 You love to fly the DHC-6 from Aero Pedro? Then I suggest to you the Kenn Borek Air Livery by Walter. Even when the original aircraft with the identification C-GKBH is a shortnose version of the DHC-6, Walter’s livery works also very well with all other versions of Pedro’s DHC-6.

Kenn Borek Air is an airline based in Calgary, Alberta, Canada. It operates regional passenger and cargo services, contract operations in the Arctic and Antarctic and aircraft leasing. Its main base is at Calgary International Airport. It charters aircraft for scientific expeditions, oil exploration, etc., and operates air ambulance services. [From Wikipedia]